Schönschrift: When I was surfing on your website I came across the expression “public knowledge“ about pornography. There are a lot of people who say “There is so much pornography in our lives, we can’t take it anymore“ and then you argue that we need more public knowledge about it. Can you explain that a little more?

We have no idea about what we are going to find in the end but I think it is much more complicated than just that people look at this stuff to get aroused and that’s it. And there is this idea that people, who come to pornography, are looking for more and more explicit material. You know you start with a bit of softcore and then you go to hardcore and then you get into really violent rape phantasies and then you actually want to go out and do that. That’s what public knowledge talks about all the time, this kind of slippery slope. I think that is such a distortion of what people who I talked to feel, their trajectory in terms of pornography has been. It’s much more about learning what you like and what you don’t like. And along the way you say “Well, I don’t like that sort of stuff, I‘ll never go near that. And this is the thing that I do like.“ Just like any other kind of cultural activity. You learn the generic conventions, you learn codes and you are starting to feel “These are the things that I like because of these reasons“. You‘ve go things to say about it. And you become more knowledgeable and more interested in that particular aspect and that isn’t the same like this slippery slope. There is more to say about porn than whether or not it is getting more explicit or it’s more and more available.

How was the response to your research project so far? 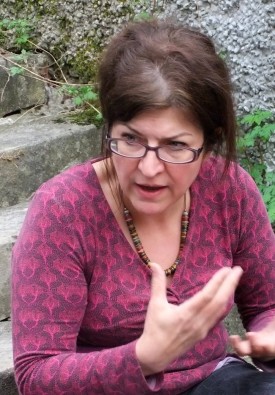 It’s just on YouTube. We are having a bit of a problem with these tube sites because they consider it to be advertising and they don’t want it, so I have to write to them and ask them if they could put it up there. We‘ve also had some complaints about the research from groups, which are against pornography who suggest that actually we were being paid by the pornographers to make market research for them. Well, that’s not what we‘re doing at all. What we‘re interested in is why people like pornography. That isn’t the same as market research for pornographers. That’s a bit of a problem and I don’t want to draw any more of that kind of suggestions because at some point I‘d like to do an other project about why people don’t like pornography. And if there is lots of talk online saying these people are in the pay of the pornographers, then it becomes a bit difficult.

But that’s one of the ways the whole thing is thought about. You are either absolutely for it or you are absolutely against it. But we are actually asking different sets of questions. We are not in that space at all. Those two options are not the ones that I consider to be interesting. We‘re wanting to know what people feel that pornography gives them in their everyday lives and how it is connected to their sense of sexuality, sexual politics etc. And the people who are interested in it at the moment are those who like it. And there would be different questions for people who don’t like pornography and what they think the connection between pornography and everyday life is.

Are you also interested in the production side of things? Are you in touch with producers or actors?

Yes, I‘ve got an other project that I‘m doing, which is interviewing people who work in pornography. What I‘m interested in is that it is a media industry and if you go to the library and get any of the media industry books, just in the index, pornography is absolutely missing. Nobody talks about it as a branch of creative practice or form of media. It really interests me that pornography is a sister production of cinema. It uses the same media, it uses the same – well, not the same distribution networks because obviously in a lot of ways it is kept separately because of legal restrictions. But it is not something completely unique. There is no talk about it as a means of production. And if anybody is talking about it in terms of productions it’s usually the stars, the people who act in it or the people who make money, like Hugh Hefner. That would be the only ones. But alongside these people are make-up artists, camera men, sound recorders, script writers. All of the things that you have in theatre or cinema or television. And I‘m interested in how those people see questions of creativity and how they see it as a job. A lot of people who work as freelancers on mainstream films would also work in pornography. Webmasters for example who work for a publishing house, but they have also worked for pornographers. And for web designers I think it’s not such a bad thing to have worked in pornography because pornography has been really important to the growth of the internet. I‘m sure there are a lot of people, who now seem to be doing very respectable jobs who have been involved in some kind of pornographic productions. So it is not totally separate but it appears to be and there is very little written about that.

Do you have the impression that the people who are answering your questions are able to talk about what you are asking, given the fact that it is so unusual to talk about sexuality and pornography?

We are not looking for people who answer the questions in a way that might be intellectualized. It would be naive to think that you can find that. But what we are looking for are patterns and ways of talking. How do they talk, in terms of realism? What does that mean? For example when people say “This is a realistic setting“ or “This could happen to me“ or “Imagine if I was in that position“. How this fits into their sense of themselves. What we‘re doing is within the wider tradition of audience studies. For example when you are studying the audience of a certain Clint Eastwood Western. You know, people might use terms like “identification” but what do they actually mean by that?

We are looking for patterns and ways of talking about things. And one of the things that we find is that actually the public discourse about pornography is in that talk as well. Like how people try to negotiate with that maybe to find a space, in which they fit in. There are different kinds of ideologies that people might be employing to talk about why they like something. And I‘m not convinced that academics can articulate what it is that they are doing with porn, not really. They can do this stuff in a class room but we are no different from anybody else.

At the moment we got these likert scales and we‘re looking for a kind of combination between things that people want to see in pornography and things they don’t want to see and what constitutes these moments, why you go to porn. And then we have these questions about what good sex is. So we‘re looking at what are the correlations there because we‘re hoping that those are going to open things up for us. We‘re just looking forward to being surprised. I‘m incredibly excited about this project. It’s been ten years in the gestation in wanting to do it and trying quite hard to find sources of funding and in the end we just had to fund it ourselves because we can’t get the money. And that might be because I wrote a terribly rubbish proposal but I actually think that people are just scared, because we‘re not talking about effects. We are instead talking about other kinds of relationships. I think that worries funders.

How do you see your role as researchers in this field?

When they started out for example this xxx-domain that was just started they found out that it actually leads to an ability to close down sections of the internet. And then they‘ll start using it on others things. I really do believe that. And the whole way in which you can close down certain kinds of talk. In terms of “There is something corrupt going on“. In terms of sexuality. For example the way, in which we can’t now talk about children and sexuality. It’s a discourse that closes down all sorts of areas that really ought to be opened up for investigation. That does not mean everything should just be free or some sort of liberal perspective. It’s about much more than that. I think it’s about the possibilities of having a real debate about how we should teach things like sex education. Things around non-normative sexualities. Currently it seems to me that we talk about ourselves as becoming much more liberal but actually there are limits to our tolerance. And they don’t have to be pushed very far before you reach that point. Around pornography in particular a lot of the laws in Europe and elsewhere are incredibly homophobic. Even as they seem to be objective, they seem to be quite open, they are actually incredibly limiting and normative in their approach.

Yes, there is something odd about sitting in a class room together watching material that we think of as quite private consumption. If you think about reading in a literary studies class. Reading can be a very solitary activity but you put up some intense little lines and everybody reads it.

Well, I giggle, I feel silly, embarrassed sometimes. I‘m also very aware of the ways in which people might well be judging me about what I‘m showing. Like “that says something about her“. I‘m aware that there might be a variety of responses. I can’t assume that everybody is going to be happy about what they are seeing. But also I‘m feeling that in a porn studies class you really can’t not see this stuff. You have to know what we are talking about. There is no way that any mainstream film was talked about without clips being shown. And there’s a purpose to that, so that everybody knows what’s being talked about. But yes, it can be a bit odd. There is an awareness of myself because I‘m not immune to this stuff. There are times that I‘m surprised by my own reaction. There are times I don’t want to do any of the stuff that I think would be normal, depending on whether the space is safe or not. And I have all those feelings, too. And I have to think about the people in the audience, too.

Laughs. God, I‘d love to give that some thought. I tell you what I really hate is when at the end of a paper when you think that you have laid out a lot of ways of thinking, someone asks “Yeah, but what about women? Shouldn’t we be caring about that?“ And actually I don’t disagree. I am very concerned about sexual violence towards women but I don’t see pornography’s causal role in that. And I think that this debate disguises a whole range of other ways in which we should be engaging with why sexual violence happens. And we won’t so long as there is a kind of pull towards blaming an object.

The unedited interview is available for download. File formats: MP3 or Ogg Vorbis.